I’m not sure there were enough drinks at Brick Street to accommodate for all of the despair Miami RedHawks fans were faced with last Saturday.

Not that anyone really saw the score going in the RedHawks favor, but this one got out of hand.

Before I skip to the game, let’s give some background. As our readers probably know, I am a VERY fortunate individual. My grandfather has season tickets to ND, so I see a lot of Irish football. This one was special though. Not in the same way as USC under the lights, or Stanford under the lights, it just had a more intimate and personal feel to the game. My lovely girlfriend Jordan is a Miami Alum and my sister Kayla is a Junior there now. Our family got to go up and watch this together, since my loud mouth and lack of a wardrobe outside of Irish gear has bled out to them being forced to watch games at times. Lucky for me, Jordan has grown to love God’s County and the football team almost as much as me.

Now, to the game. We meet up and get settled in. The grandchildren and grandpa are all sitting together and man, it doesn’t get much better than this. The few Miami fans in front of us smelled like arrogance and obnoxiousness. Folks, they didn’t disappoint. After watching these guys midway though the 1st quarter chanting for the Redhawks down 21-7, I remembered why I never took a visit to Oxford.

The 1st quarter and pregame were better than the rest. My GOODNESS the Irish ran the ball. It has taken me time, but I am starting to like the new identity Notre Dame of this year. There is an understanding that their QB and stable of running backs can be a game changer.

A couple weeks ago I was hard on Kelly and the OC for the lack of deep balls thrown. That’s my B. The Miami (OH) game was the best mix of deep passes to keep defenses honest that has been exhibited by a recent ND team. In midst of a huge run attack, there were just enough passes down the field to keep the defense honest and keep them on their heels.

Couple things to take away from the game.

1. The Irish have only allowed 1 rushing TD all season. Yes, that’s right, ALL SEASON. #WeDidntSeeThatLastYear

2. The Irish are one of three teams in the country that have been perfect on all Red Zone chances. Are you kidding me!? I thought last years team had offense. MY GOODNESS 👀 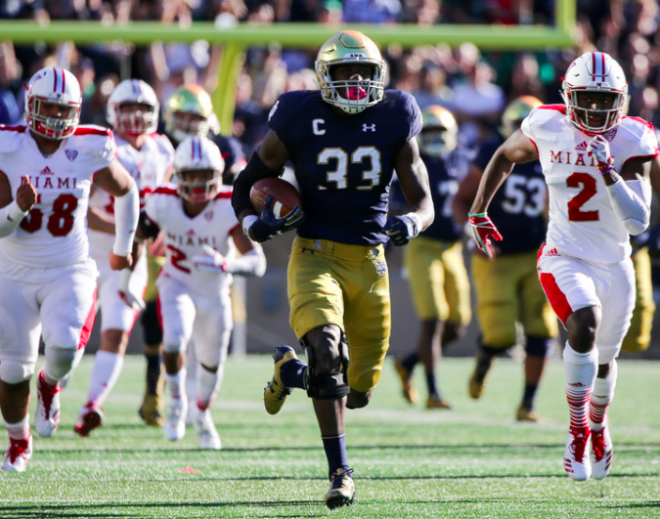 Don’t expect anything different than what we’ve seen from the Irish. UNC has been injury-stricken this year and much of the team is out. That’s not a good recipe for a ground attack that just keeps getting better and better. Expect lots of rushes and lots of point.

See the below links for some of my reading material, podcasts, and more. Quick, easy links. Think of it
as a jab-step, dribble down the lane for an easy 2.