Well, the College Football Playoff talk just got a LOT more real for the Irish.

Good news, that wasn’t my dream, that was realty. Nobody, and I mean NOBODY, thought that the score of the game would be that lopsided. Prime time, the lights on at Notre Dame Stadium, this was supposed to be a close game. But hell, I’m not complaining!

There was a lot of this going on last Saturday night. Josh Adams jumped his way right into the Heisman talk with a 19 carry, 191 yards, and 3 TD performance. The man AVERAGED 10 yards per carry. Not to mention the 2nd leading rusher, QB1 Brandon Wimbush, had 14 carries for 106 yards and 2 touchdowns. The rushing attack proved to be too much for the USC defense and the big guys on the left side (Nelson and McGlinchey) made their mark.

USC looked out of sorts as the first snap on offense was a fumble recovered by the Irish. I won’t go into the play by play for you all, but it got out of hand early. 28-0 at the end of the 1st quarter and you have the story. Every Notre Dame fan in America was having the time of their life, while every Trojan fan was wondering if this was the end of their time. And I think both were a little right

This huge performance by the Irish has catapulted them into the national spotlight for a couple things.

1. College Football Playoff- the 1st rankings will be coming out on Tuesday, and the win vs USC and a win vs NC State would get them towards the top of that list. Don’t questions this, if the Irish win out, they will be in the CFP. No questions.

2. Josh Adams’ Heisman Race- After recent weeks, Adams has sent himself into the mix making everyone look silly with 6+ runs of 50 or more yards. This guy is for real and running behind this O-Line, he will continue to do so. 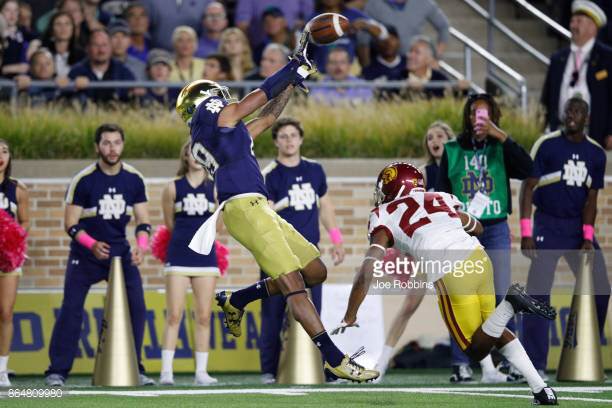 This week is a big game for Brian Kelly and his Irish football team. It’s been a while since the Irish have been ranked in the top 10 in the country and it’s the first time in a while they have played back to back weeks against top 20 opponents. USC was great, but any slip up sends their CFP dreams down the drain. NC State is no slouch, so the Irish better bring it again and keep this locomotive going. ALL ABOARD!

35-21, Notre Dame. Against NC State their has been some talk of the D-Line. They are great, but I feel the battle in the trenches is in the Notre Dame favor and add in not just any running back, but Josh Adams and you have a deadly weapon.

Look for Brian Kelly to mix up some passes into the scheme this week more than usual. Wimbush showed last week he can make the pinpoint throws, it just takes the confidence to throw them. EQ and Stepherson keep the receiving game alive and catch quite a few today, for some big plays as well.

Look for this one to be close, and potentially blow open late game.

See the below links for some of my reading material, podcasts, and more. Quick, easy links. Think of it
as a jab-step, dribble down the lane for an easy 2.